What we have outlined above, to the purely rational mind, cannot appear to be anything but the “usual pseudoscientific fantasy”. But here, for the incredulous and others, a new fact intervenes: thanks to that “fantastic theory” it has been possible to construct a machine and, by means of which, experience it. Thus the “Theory” becomes “Theory validated by experimentation” and, for our “scientific” method of procedure, this is more than sufficient to say that the theory is correct and that “life” behaves according to its directions.

The machine does truly incredible things. Ettore foresaw a course composed of six successive phases of research; for now, the machine has demonstrated and made “real” the first four, all absolutely beyond our current most advanced knowledge.
One hint, at least, of these first four phases we want to give you. 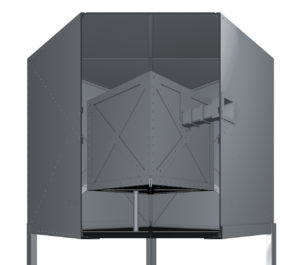 Rolando’s machine can liberate antimatter in an organized form. It projects identical and opposite particles at the matter under examination, “cancelling it” thus producing annihilation.
Rolando is able to stimulate selective annihilation, that is he can decide which material to annul, also when a ray travels through different materials, also places in front of the material itself. In addition the antiparticles can mix, in order to annihilate anything, also if the things are made of different materials.
When the scientist, Clementel, saw the first experiment in 1976 he thought he was in front of a powerful laser. However, he had to rethink his opinion when he saw material positioned behind a screen being destroyed – without so much as the slightest damage to the screen from the annihilating ray.
Imagine being able to make the mountain of refuse in the world disappear in an instant. This is possible with the machine.

The second phase: production of energy

In this phase Rolando’s machine is predisposed to slow down the spin of the particles in the material under examination.
Such a slowing down induces a kind of internal attrition in the material, a bit like what happens when brakes slow the wheels of your bicycle, the evident effect of which is heating. Calibrating the slowing well, the material so treated can be brought to a temperature inferior to that which would make it melt, let’s say in the order of 40% of that of fusion or boiling, to remain sufficiently distant from fusion itself, which would make the material vanish.
The particularity is that one can have a hot object, at always the same temperature – the oscillations measured are minimal – but that it does not further heat up, even if the heat is not absorbed from outside.
If the heat, on the other hand, is absorbed – for example by a system of water circulation around the heated material – the object will continue to stay at the same temperature while hot water of several hundred degrees is made available to produce energy. Imagine it: unlimited energy, without the consumption of raw materials, at a cost of practically nothing!?

… the dream of all the alchemists.
In this phase, the results of which were achieved in 1992, a volume of material is taken, for example a block of polystyrene and transformed, still maintaining the form and the volume almost completely … into gold. Here we will leave you to imagine what this phase could make possible; we only assure you that this possibility could bring about solutions to many of the problems the world is currently debating.

the sequence of transmutation of foam rubber (PVC foam) cubes 15x15x15 cm into gold. The whole sequence takes 25/100 of a second. The material was provided courtesy of Antonio Rosada – © Rolando Pelizza

With the machine it is possible to transfer people and objects into other dimensions, in time and space, and possibly take them back to the original point of departure. This means, for example, making something disappear from the physical world and taking it to an invisible dimension. But it also means rejuvenating a body by ten, twenty, thirty or seventy years, maintaining intact the entire package of knowledge and memories: in short, once we get old, we could have our youthful bodies back, keeping all the memories of our experiences and the knowledge of an entire lifetime.